5 Ways to Guarantee Your Interviewer Won’t Forget You

Okay, now, this here Crazy Dave. And this here the first installment of Crazy Dave’s Crazy Column, which The New York Times has already hailed as “inspired–the most helpful, genuine, and intellectually stimulating column in journalism.”

Anyway, Forbes ran an article discussing the perils of interviewing in the current job market, and how among those perils is the fear that you will be forgotten, as well as how to overcome these obstacles. And you know, it occurred to me while reading what I assumed would be a helpful article that there was a huge problem with it: it was ideological! That’s right! So this here what I’m going to do (and I, unlike Forbes, believe in brevity, and can get it done in 5)…

5 Ways to Guarantee Your Interviewer Won’t Forget You Whilst Escaping Ideology!

by this here Crazy Dave, Local Editor of The Thirsty Thespian and Founding Contributor of The Ideological Times

Problem: I’ve seen it time and time again. As Head Janitorial Staff, Department Chair, and Distinguished Professor of Philosophy (with an emphasis on escaping ideology) at A Midwestern University, I was put in charge of search committees for both internal and external positions ranging from bookstore clerks to tenure-track professorships. Despite this wide range there was one overwhelming commonality among all the applicants I interviewed to whom I didn’t offer a job: selling yourself short. Aspiring professors would be overly self-deprecating: “Oh, I don’t have a lot of experience.” Or a janitorial staffer would self-debase: “I’m an expert shit cleaner.”

Solution:  LIE! That’s right! How are they going to know any different? If you are applying for a job in academia, make up something about how you single-handedly established a scholarship fund or a new academic program. Trust me, they rarely check!

Simple truth: You’ve got to sell yourself, even if that means selling more than you have! Salespeople do it all the time and get away with it, then blame it on someone else when they can’t deliver–why shouldn’t you? If worse comes to worse and they accuse you of being less-than-forthright, tell ’em your professor gave you bad advice!

Listen here, fellas and ladies alike–if your partner is complaining about commitment, what do you do? Put a ring on it! Even if you’re being disingenuous, that’ll shut ’em up! Same thing applies to the working world.

Problem: I hear it time and time again: “Oh, I don’t know how to prove that I’m in this for the long haul.”

Solution: If you want to prove your value to a company, get down on one knee and propose marriage to your interviewer! Trust me, it works every time! Plus, it’s a win-win-win situation: you may get a husband or a wife out of it, you’ll impress them with your initiative, and you’ll get a job! Worse case scenario, if they do not want to marry you–if they’re already engaged to someone else or in a committed relationship or marriage, or what have you–they’ll at least probably still offer you the job!

Simple Truth: The sanctity of marriage is a beautiful thing–don’t underestimate its power.

Your damn recycled resume and cover letter do not go unnoticed–I cannot reiterate that enough!

Problem: If you’re applying for a job at a University as a President and you send the same cover letter you sent for a job as Head Burger Flipper at Burger King, the hiring committee is going to take notice and wonder how your frying up a couple burgers will have anything to do with running a school… they’ll think you’re on drugs! I know, while there’s probably actually a lot in common between these positions, you should probably spruce up your relevant experience verbiage.

Solution: Drink some Ovaltine and get to work, dammit!

Simple Truth: The devil is in the Goddamn ideological details, dammit! Am I seriously having to explain this to you?! If you don’t devote time to your job search, why should an employer devote time to seriously considering you as a candidate?

This kind of goes along the same lines as #3 but more specific. Resumes and cover letters are ideological, dammit! Especially if you’re sending the same ones to hundreds of jobs!

Problem: You’re not going to impress a recruiter with an ideological resume or cover letter that doesn’t dare to be different!

Solution: Escape, dammit! Bake your resume into a pie and send it to your interviewer! They may have to eat through a bit of the pie to realize that there’s a resume in it, but hell, what a tasty discovery, am I right?! And it’s creative! And it totally escapes ideology!

Simple Truth: Employers value those who dare to be different, and who doesn’t like pie? You’d have to be a serial killer to not like pie, and in that case, why would you want to work for a serial killer?

Problem: The problem with interviews is getting into the door and not distinguishing yourself. It happens all the time. You get past the first round of interviews, and then you go home completely unremarkable, unmemorable, ideologically forgettable.

Solution: To quote the great Nat King Cole, you need to be “unforgettable.” Here’s what you need to do: Throw hot coffee in your interviewer’s face, and throw the table up while exclaiming “Ideological! This interview is ideological!” Then run out of there like a bat out of hell! Trust me, you will not be forgotten.

Well………… There you have it, folks–5 surefire ways to guarantee you’ll get the job! This here Crazy Dave! Have a great labor day, dammit! Escape!! 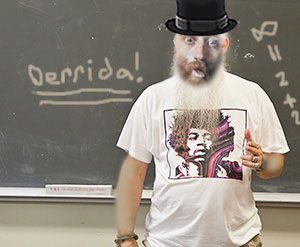 CRAZY DAVE IS THE KIND OF MAN WHO NEEDS NO INTRODUCTION. HE IS CLINICALLY INSANE, AND THE FOX SHOW PRISON BREAK WAS BASED OFF HIS OWN EXPERIENCES BREAKING OUT OF A PENITENTIARY, OR WHAT HE REFERS TO AS HIS “ESCAPE FROM IDEOLOGY!” HIS OFTENTIMES CONTRADICTORY BELIEFS ALWAYS PROVIDE UNPARALLELED HUMAN AUTHENTICITY, AN INTERESTING STUDY.