Crazy Dave, who was recently hired at a university, announced yesterday that he was fired. Explaining the reason for his his firing, Crazy Dave told reporters from the university’s newspaper: “It’s all ideology!” The insane, under-qualified professor was reportedly fired for forcing his students to watch a graphic scene–a poorly shot sex scene–from Tommy Wiseau’s 2003 film The Room on repeat for three hours, after which he demanded they “analyze, and ‘ideologicalize'” the film, the latter term he apparently coined in a scholarly paper titled “Ideologicalizing Ideology: The Ideology of Philosophical Ideologies” which has been rejected from every university press in every country that has a university. “It was horrible,” Kim Tyler, a former student of Crazy Dave’s Intro to Escaping Ideology class, told reporters. “It’s so poorly written and gross.”

Other students have commented on Crazy Dave’s bizarre behavior during the screening, where he apparently kept his eyes open without blinking for the entirety of the three hours.

The film, which was previously despised as the worst film ever made before Terrence Malick’s recent commentary to the contrary and Lenny Abrahamson’s plans to resurrect the film with a sequel, was described by Crazy Dave as his “favorite film, the only film that truly escapes ideology!”

University President Doug Snider, who previously praised Crazy Dave’s moderate intelligence and financial salvation of the philosophy department in the current budget climate, has recently stated regrets in hiring him: “We can’t stand to have a psychopath living among us. The man is obviously disturbed. The philosophy department will sadly have to be cut from the school’s academic programs. Part of me thought it was too good to be true.”

Snider also faces the possibility of a lawsuit for gross oversight as well as the termination of his own contract. English department head, Dr. Nathan Barrow, discussed the immense incompetence of the administration, especially Doug Snider, whom allegedly “hired this guy for nothing but a weekly ticket to the local Chinese buffet. It’s suspect, considering these transgressions, whether Snider possesses the credentials worthy of his current position as acting president.”

Jackie Gleason, Dean of the Undergraduate Studies, stated her own take on Snider’s “immense incompetence”: “Snider was saving the University hundreds of thousands of dollars. We can’t turn a blind eye to that. Snider should be promoted to President of the State!” When asked about whether she meant President of the United States, or if she meant Governor of the state, or Mayor of the town, Gleason expressed confusion: “I stand by what I said. What are you, dense?” The University department member who chaired Gleason’s M.Ed. thesis revealed the extent of her thesis work, which we have attached below. 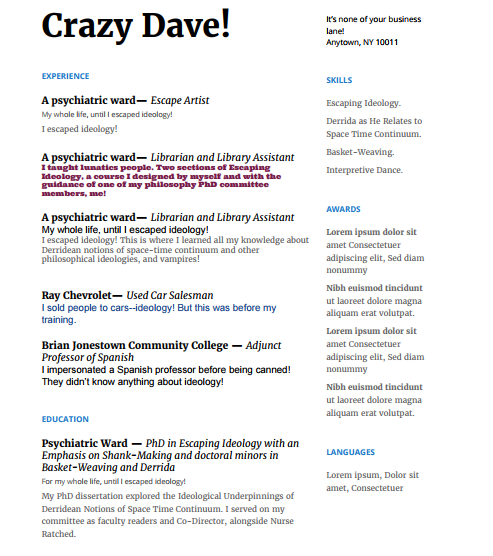 President Snider, however, discussed his reasoning in hiring Crazy Dave as tied to his “immaculate Latin.” Not a native Latin speaker or possessing any knowledge related to Latin, President Snider commented: “I like how Crazy Dave integrated Latin into his curriculum vita, perhaps in an understated way. It looks prestigious and what I imagine perfect Latin would look like.” Snider added: “His experience as a professor of Spanish also suggested to me the myriad of talent he possesses. With that in mind, I should have reflected more on some of the obvious deficits.” When pressed, Snider mentioned that “it’s perhaps suspect the authenticity of Crazy’s credentials. My secretary is fired because she didn’t read this curriculum vita clearly! Am I to blame for her incompetence!?”

Crazy Dave, who has sent video criticism of Snider’s decision as an email attachment, declared: “I don’t see what the problem is. It’s not like we did reenactments to confirm ideology. I show them what’s hard to see. That was in my contract, to escape ideology!” In addition, Crazy Dave rejected Snider’s suggestion that his academic training had any deficits. He revealed that it was actually famous actor James Franco who inspired his dissertation topic, rejecting prior criticism of Franco and clarifying:

James Franco escapes ideology! He’s above everyone else and he takes his craft all the way! Just look, there’s Joaquin Phoenix; he almost escaped ideology! Remember when he grew that long beard and reverted into himself–the media was criticizing him, but he was escaping ideology! And then he pussed out and became a rap star!

James Franco’s book Palo Alto inspired me to break out of any ideology and do anything you want and write sh*t all over the walls–he’s so precious to me! That’s why I rejected the conventionality of academic prose and opted to manifest my deepest thoughts on the the stall door.

Crazy Dave added that the subject of his dissertation, concerning how one might “escape ideology,” came to fruition when he himself “escaped ideology,” citing his escape from a penitentiary as the moment that his project achieved its proposed goal. James Franco has not yet commented on Crazy Dave’s radical passions.

Crazy Squirrel was formerly the pet of Crazy Dave. Crazy Dave caught Crazy Squirrel while on break during a Graduate Conference, having then brought Crazy Squirrel as a prop for his presentation on Ideology–a presentation that soon devolved into a discussion on squirrel maintenance–before eating the poor, helpless creature, blood gushing from his once-healthy limber body. Crazy Dave commented: “I was saving him. I consumed his ideology!” Out of respect for the creature, we have published an article posthumously that the squirrel had written prior to his capture.